“I am honestly the freest-spirited control freak you’ll ever meet,” Vanessa Hudgens says, sitting in the backyard of her new Studio City home, the Valley skyline extending behind her. She just moved in this summer, so the place is sparsely decorated, but she has big ideas for the vibe — keywords include “’70s,” “porny,” and “masculine” — and plans to design it herself. (Her previous place required too much upkeep for someone as on-the-go as she is.) From her current perch, Hudgens can point to her first house downhill, where she lived for 11 years and experienced the kind of Hollywood whirlwind few can imagine. The property line even butts up to where she is now — she is quite literally looking down at her old life.

It’s mid-afternoon in early August, and Hudgens estimates she’s spent only five or six nights at the new house in total. It was her call to do our interview here, rather than the planned Mexican restaurant. She got back from a work trip to Capri the night before and is heading to Arizona in the morning to visit her boyfriend, Arizona Diamondbacks player Cole Tucker, whom she met during a celebrity meditation Zoom group. “I’m not going to call it a celebrity Zoom, but it was a Zoom meditation group that Joe Jonas put together, yes,” she says. “I did not expect it at all. I don’t think if I entered a meditation Zoom, I’d be like, ‘This is where I’ll meet my person.’ I just showed up and I was like, ‘Who the f*ck is that?’”

Tonight she is hosting a birthday party for a friend who has been staying at her house, and over the course of our two-hour hang, she is quietly directing the party-planning around her, at one point suggesting what flavors of ice cream another friend should pick up from the store. She takes partying very seriously. “There’s nothing that infuriates me more than when I’m ready to throw down, and then I show up somewhere and it’s just not the vibe,” says Hudgens, dressed in a cropped white tank top and silk Versace pants, still in full glam from the photo shoot earlier. “If it was up to me, every club would be an underground rave with lasers and smoke machines and just vibes and it’s dark and you can’t really see anyone.” 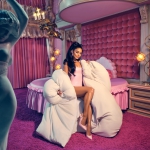 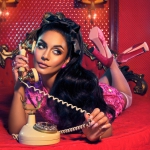 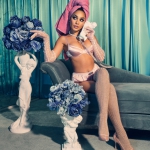 After buzzing me through the gate, Hudgens welcomes me into her vast kitchen and offers a canned Caliwater, her brand of cactus water beverages — “We got a new distributor so the packaging is a little off, but it still tastes good,” she notes — then starts scrolling on Postmates to find something to eat. Eventually, she lands on H.O.P.E., a vegan restaurant nearby. Though I insist I’m not hungry, she hands me her phone to order something anyway. “Are you sure? Have you ever had H.O.P.E.?” she asks. We both get beefless jerky, per her suggestion. Finally situated cross-legged on a patio sofa, her dog Darla at her feet, she relaxes. “I just figured I’m home so rarely, it’s nice to spend as much time here as possible,” she says.

“I’VE BEEN THROUGH TWO VERY LONG LIFE-CHANGING RELATIONSHIPS, AND NO ONE REALLY KNOWS WHAT HAPPENED EXCEPT FOR ME. WHEN I WRITE MY MEMOIR, IT’LL BE AMAZING.”

Last November, she starred in Lin-Manuel Miranda’s Netflix film adaptation of Tick, Tick… Boom!, earning some of the highest critical acclaim of her career thus far. The same month, she reprised her roles in the third installment of Netflix breakout hit film series The Princess Switch, on which she also serves as a producer. Earlier this year, she stepped into a completely new role: red carpet host, taking on high-pressure gigs for the Oscars, the MTV Movie and TV Awards, and the Met Gala, the latter of which marked an acceptance into the high fashion world that eluded her in her early career. (She only attended Paris Fashion Week for the first time this year.) “I believe in divine timing, and for whatever reason, I wasn’t meant to be in that place any sooner,” she says. “I’m so grateful to have it later in life because I’m more comfortable with who I am as a human being.”

Tick, Tick... Boom (2021)
Vanessa as Karessa
It tells the story of Jon, a struggling composer whose life seems to be going nowhere. About to turn 30 and still waiting tables for a living, Jon is desperately scared that he may never “make it” on Broadway.
info photos news

TPS: Romancing The Star (2021)
Vanessa as Fiona / Stacy / Maragaret
Princess Stacy of Belgravia and Queen Margaret of Montenaro are preparing to host an international Christmas festival in Montenaro, the centerpiece of which is the "Star of Peace", a sacred relic loaned by the Vatican. Shortly after the Star arrives, thieves break into the palace and steal it.
info photos other

My Little Pony: A New Generation (2021)
Vanessa as Sunny Starscout (voice)
Friendship has been replaced by fear in Equestria. Sunny, an Earth pony, and Izzy, a unicorn, embark on an adventure that takes them to faraway lands and challenges them to make new friends as they strive to restore harmony to Equestria.
info photos other
Calendar
Elite Family